"A magnificent, deeply evocative album by a great singer-songwriter and his fantastic band. I give it the highest marks." Making a Scene,   Rhetta Claudette Akamatsu, USA

"An incredible mix of roots styles makes this music so versatile and suitable for music lovers from all over the world".  Roots Time, Belgium

Harper's ability to make another culture's music accessible to a mass audience is analogous to Elvis, The Stones, and Stevie Ray Vaughan's co-opting Delta Blues guitar, an aid to bringing us all closer together at a time when the world desperately needs just that",  Don Wilcock, American Blues Magazine USA

"An excellent blues album that speaks to how most of us are feeling these days, addressing those thoughts and hopes and fears and needs we have in common"   Michaels Music Log, USA

"Harper and Midwest Kind is definitely one of the very positive surprises of 2020. People who would like to discover new music are in the right place here. A high recommendation on my part" - Sounds of the South, Germany

"‪There aren't many other blues artists quite like Harper, so those looking for something different will want to check out Rise Up"   Bill Mitchell,  Blue Night, US 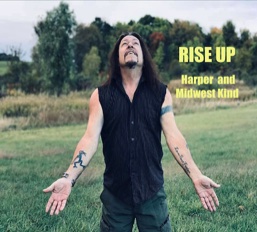 A singer/songwriter and masterful musician, Harper brings his stories to life with his unique blend of styles that incorporates elements of blues, soul, folk, R&B and so much more.· Harper's work on the harmonica is superb...and then some!!!. Reflections in Blues, USA

There are many moments of true brilliancy....Harper's new album is, undoubtedly, the pinnacle of his career so far. Gio Pilato, Blue Bird Reviews, United Kingdom

Impassioned vocals and an equally emotion-laden harp! Harper’s songs – all eleven tracks here are originals – are distinctive and often catchy blues, avoiding blues clichés though rooted in a late 60s/early 70s style, occasionally with a tinge of Americana or rock. This is a fine release, recommended to all lovers of modern blues – but don’t expect a guitar fest, this is far more subtle than that. Blues Matters, United Kingdom

This originality deserves the attention of all music lovers! Rootstime, Belgium

"Show Your Love" is not your conventional blues album, but Harper’s vocals and harmonica virtuosity, along with the tight support of the backing band are a plus, and the use of the “Down Under” instruments add a lot of character to these songs ... already good songs anyway. If this is what we’re calling “World Blues,” count me in. The terrific music and the positive messages make this album a keeper in most discerning fans’ collections. Graham Clarke, Blue Night USA

“Harper is an original, playing the harmonica like an authentic Chicago bluesman, singing about unity and love like a member of peacenik jam band, belting crisp vocals like a straight-up superb classic soul performer, and then pioneering the didgeridoo into these popular forms of modern music. Unique and quality music of this kind is truly a rare treat”. Karyn Albano, Modern Rock Review, USA

"Harper was born to play the harmonica. He has an amazing presence and sense of what fits in when he is playing. His blues is original!” Muzik Reviews, USA.